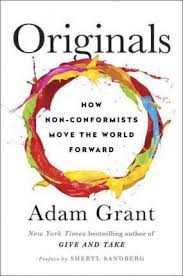 In this book, Adam Grant breaks down what “being original” means by studying habits of highly creative professionals and dispelling a number of myths related to originality. His other famous book, Give and Take, taught me a lot about what professional networking should be — so I decided to give Originals a shot too. Here’s what I learnt:

How to generate original ideas

The key to generating a few good ideas is to try to generate a lot of them — if you do so, some of them will inevitably turn out to be good ones. It’s better to not try and perfect mediocre ideas, be prolific instead. The author gives examples of Edison (who had thousands of patents) and Mozart (who composed thousands of pieces) — generating a massive body of work seems to be the key to ending up with a few hits in the process. We are a terrible judge of our ideas — continuously test out your own with your target audience and work on the feedback. Seek out experiences that broaden your perspective by engaging with orthogonal fields. Lastly, procrastination is great to avoid premature optimization. When you put off a problem, your mind keeps working on it in the background and explores it from a variety of angles.

How to execute original ideas

Adam starts off this section by claiming that first mover advantage is largely a myth. This is also closely related to the adage in startup industry that the best product doesn’t necessarily win, but the winning product eventually becomes the best product. Facebook was not the first social network, Google was not the first search engine and Apple almost went bankrupt in 1997. Watch out for products with network effects or patents protection — first mover advantage might matter there to some extent.

Successful entrepreneurs are great at building a balanced risk portfolio — instead of taking extreme, uncontrolled risks, it’s better to balance out the startup risk with something else more stable — many successful entrepreneurs kept their day jobs and worked on their ideas at nights and weekends till it got to a point where they were comfortable taking a leap.

How to push original ideas in an organization

To do this, you need to earn sufficient status and idiosyncrasy credits. To recruit people onto your ideas, appeal to the top and bottom of the hierarchy — senior people are confident in their status and are willing to risk on new bets, while newcomers are hungry for high risk, high reward projects. Another good tip in this section was to repeat your ideas over and over to make it more familiar to everyone. To build a movement around a new idea, make sure it’s idiosyncratic enough that it attracts strong missionaries, but not so radical that it alienates the bulk of potential followers. In this section, Adam Grant also adopts and summarizes Ray Dalio’s Principles (review) of radical transparency and idea meritocracy and recommends starting these as a base for your company’s culture.

How to raise more original children

Lower the number of rules you enforce, and justify the rationale behind the rules instead. Child prodigies usually tend to not be highly influential — they’re usually good at mastering the rules of the game, and not inventing new games. Another observation that was interesting here: later-born children tend to be more rebellious and original — in part by trying to differentiate by picking careers that break the mold, and in part due to parents relaxing the rules as they gain more experience.

Overall, I liked this book as a good recap of a number of ideas I had encountered in other books. The founder stories of Segway (an invention that failed to live up to its hype, despite stellar inventor credentials of its founder), Seinfeld (the comedy show about nothing that almost never happened due to poor initial reviews with test audiences),Warby Parker (the founders were Adam’s students at Wharton — he passed on the opportunity to invest in the eyewear company) and a number of other companies were a pleasure to read as well!

This is #46 in a series of book reviews published weekly on this site.